THE 99 NAMES OF THE GODDESS

READING:
10 February 2023, 7 PM, Reading and talk, with aperitif.
Elisabeth Masé will read from her new novel “The Sleeping Crocodile”. It is about early female conditioning, withdrawal, fear and rebellion as well as the power of language images. Until finally the crocodile awakens…

FINISSAGE:
Saturday, March 4th, 2-6 PM with the presentation of the essay THE TALMUDIC BRIDE AND HER SHADOW’S DREAM by and with Almut Sh. Bruckstein at 4PM

THE 99 NAMES OF THE GODDESS

READING:
10 February 2023, 7 PM, Reading and talk, with aperitif.
Elisabeth Masé will read from her new novel “The Sleeping Crocodile”. It is about early female conditioning, withdrawal, fear and rebellion as well as the power of language images. Until finally the crocodile awakens…

FINISSAGE:
Saturday, March 4th, 2-6 PM with the presentation of the essay THE TALMUDIC BRIDE AND HER SHADOW’S DREAM by and with Almut Sh. Bruckstein at 4PM 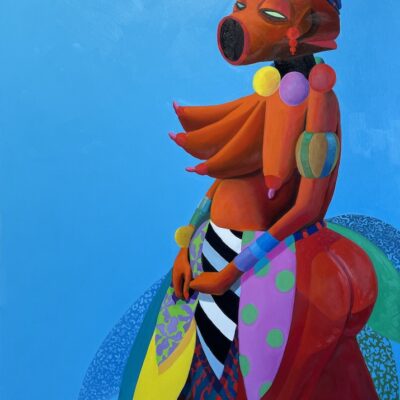 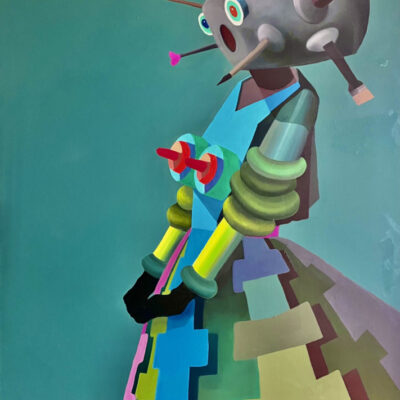 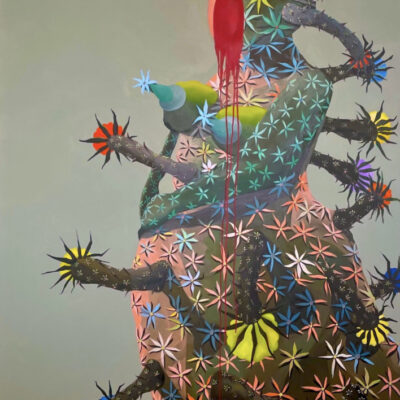 The exhibition “THE 99 NAMES OF THE GODDESS” by Swiss artist Elisabeth Masé is dedicated to a shift in meaning: What would happen if all 99 traditionally male names of God were given a female dimension? What would change because of the female form? When and where would the dichotomy of male and female possibly cease to exist?

For centuries, women have been seen from a chauvinistic and patriarchal point of view. Female thinking, feelings or interactions, and even female sexuality and spirituality have been and still are manipulated in favor of patriarchal structures.
What is less known is that before the advent of monotheistic religions, the cult of the goddess was predominant.
With her, above all, the earth and the mother were associated as life-givers and takers.
Alongside the great Mother Goddess, numerous cultures had various secondary female deities characterized by qualities such as cosmic energy, timeless beauty, divine prophecy, fiery intelligence, intoxicating lust, blind rage, commonality, and justice.
History tells us that the worship of a versatile female deity did not last, at least not officially. Her worship was increasingly suppressed, repressed, and forgotten over time. In its place came the classic role-playing of men and women as we still know it today. Fortunately, since the last century, the situation of women has improved politically in parts of the world. Efforts are being
made to achieve equal rights and equal treatment. Despite this necessity, little attention is paid to the existentially feminine aspect of creation. Elisabeth Masé explores this philosophical and cultural anthropological aspect in her series of
paintings. She wants to remind us of original spiritual femininity, she thinks about the unused potential of female energy and wants to influence our imagination.
A possible political statement thereby is left to the viewer. Her new goddesses want first and
foremost to inspire and not to instruct. 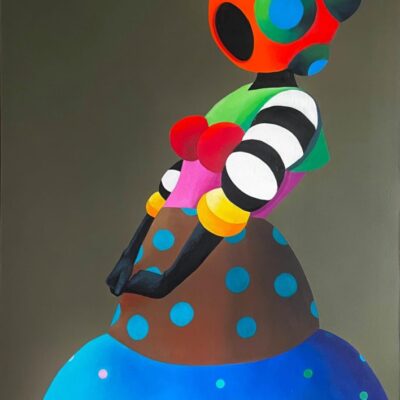 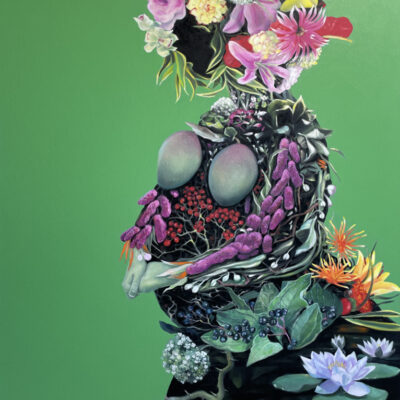 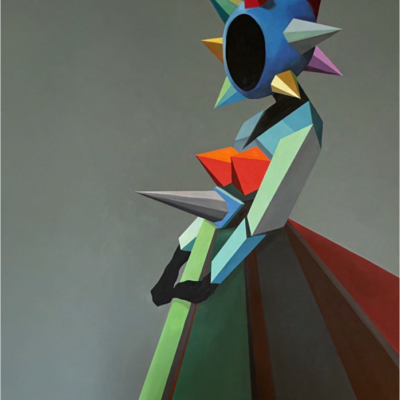 In the back of the gallery, a darker work by the Swiss artist is on display: A series of watercolors
on black paper, capriccios of “Brides” in various states and situations, some of them disturbing.
Some of the brides are funny, others perturbed and even aggressive. Because of the emotional discomfort they cause, these works can certainly be interpreted in sociopolitical terms.
Elisabeth Masé thus triggers a sacred cardinal point of society: marriage. She subverts the conventional, sometimes kitschy “dream wedding” and exposes the partly politically generated, dramatic abysses of a pairing in societies where man and woman are not equal. An unfree choice of the bride, forced by relatives, parents, and for religious or political reasons, gives birth
to monsters. Nevertheless, Elisabeth Masé clearly appeals to humanity, to capacities for
redemption, empathy, and emancipation. To a human evolution that can be achieved through a
spiritual, sexual, and sociopolitical balance. 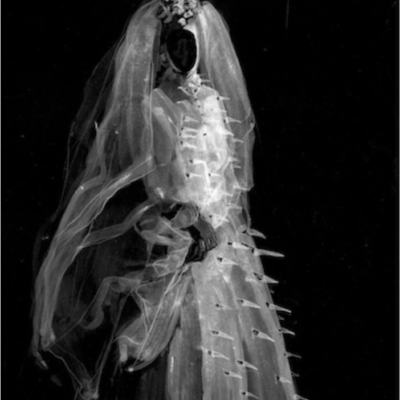 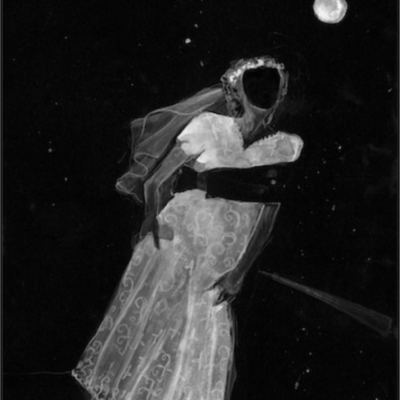 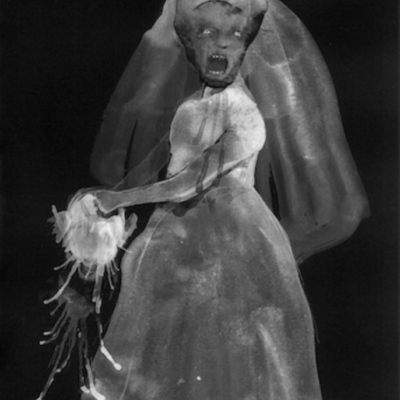 What is a “New Goddess”?

I am concerned with the creation of female, new icons. I use the term “goddess” because the term God” has a male connotation. We women, who after all make up half of humanity, have so far only been able to identify with a male-defined “God” within the monotheistic religions. This weakens our self-esteem. An image of a god is a kind of superego. They are thoroughly male, divine superegos that shape or are supposed to shape our world, or are supposed to. I would like to change that.

What are the qualities of a female goddess?

A female goddess has power. For me, she embodies the very primal force. Not in the sense of muscular strength, but in the sense of growth, protection, and presence. The quality of this presence can also be negative. My painted goddesses are not always loving and beautiful. They can also be grotesque, aggressive, or melancholic. I understand their force in terms of disruption. We all have to cope with positive and negative energies in order to survive. Even the destructive can be purifying and create conditions for the new.

What would be changed by the image of the “goddess”?

What does such a correction do?

What would be better through the change you envisage?

I want to value and intervene in culture, but I clearly think that we always need both: The masculine and the feminine, anode and cathode, transmitter and receiver. Life and the exchange of energy are not possible otherwise. However, I would like to restore the original order. The woman, not the man, is the receiving vessel to create life. She is the goddess who conditions a god who is not always male. He, too, is born out of her.

A society that recognized the feminine as the “basis” and “primordial force” and honored it accordingly would, in my view, be happier, more pleasurable, and more sensual.
It sounds like more than new biology is being established here.
“Motherhood” is inevitable as a beginning. We don’t really need the “dominion” that follows and the then seemingly eternal “master creates”. The latter, as we know, produces exploitation and war. That is why my “original god” is a “goddess”. I would like to place her at the forefront of cultural consciousness and also socially, in the beginning, in all her ambivalence and complexity.

What would happen if one could socially establish such a veneration of the origin?

There would then be fewer cars and more sex.

MORE ABOUT THE ARTIST, HERE