David Hochbaum (b. 1972) left his New York home in 1990 for Boston ‘s School of the Museum of Fine Arts where he studied photography, painting and sculpture. In 1995, he returned to New York and began showing locally almost immediately. In the following decade, Hochbaum’s work has been seen in Germany, Italy, France, Denmark, UK, Sweden, Switzerland, Chile and everyday venues across the United States. Dedicated to the idea of community, Hochbaum strives to work collectively with artists from all genres and backgrounds. Besides being actively involved with collaborative ensembles, he hosts monthly critique salons, offers free workshops for artists and helps to create projects for artists which raise money and interest in their work. David Hochbaum’s work has been exhibited in galleries and museums throughout the
United States, Europe, and South America. Amongst his many collectors, Hochbaum’s
work has been added to the collections of Elton John, HR Giger, Matt Groening, and
Emily Deschanel

David Hochbaum (b. 1972) left his New York home in 1990 for Boston ‘s School of the Museum of Fine Arts where he studied photography, painting and sculpture. In 1995, he returned to New York and began showing locally almost immediately. In the following decade, Hochbaum’s work has been seen in Germany, Italy, France, Denmark, UK, Sweden, Switzerland, Chile and everyday venues across the United States. Dedicated to the idea of community, Hochbaum strives to work collectively with artists from all genres and backgrounds. Besides being actively involved with collaborative ensembles, he hosts monthly critique salons, offers free workshops for artists and helps to create projects for artists which raise money and interest in their work. David Hochbaum’s work has been exhibited in galleries and museums throughout the
United States, Europe, and South America. Amongst his many collectors, Hochbaum’s
work has been added to the collections of Elton John, HR Giger, Matt Groening, and
Emily Deschanel 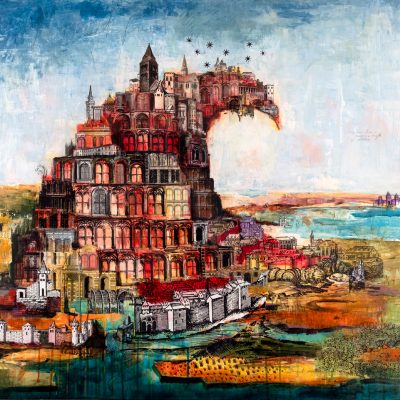 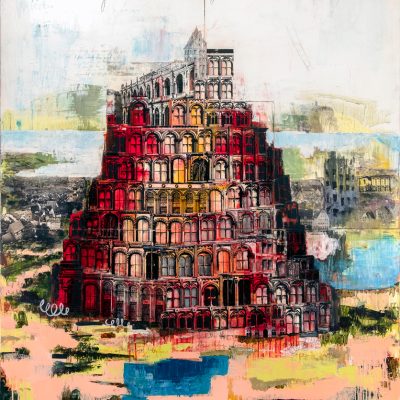 By combining several ingredients and elements David Hochbaum is looking for certain philosophical and psychological truths, while he tries to uncover a revelation of understanding. His approach to art actually reminds that of the chemist seeking the philosopher’s stone in Alchemy: by experimenting all the fine art techniques he learned during his studies, such as photography, painting, woodworking, film and sculpture, Hochbaum in his studio calcinates, distillates, ferments, and sublimates the subjects of his work, transforming them through his very own original language from common people to mythological and psychological archetypes.

Following a strong interest in ancient Greeck mythology, Hochbaum found his personal connection to the myths, giving birth to new interpretations allowing him to explore the world around. The mythology was slowly becoming less about archaic history and becoming more centered on his private life, on his living context, on his historical time.

David spends a lot of time photographing the places he frequented as a child and as a young man, to inject the figurative element of a specific place and time. This process mixed with the spontaneous creation in the studio allows him to recreate and reinvent his memories and his personal history, adding subtle references of current events happening to and around him.
His collages of cities and towers reflect the surroundings of the cities he lived and the places he has traveled over the years. The cities in Hochbaum’s work are at the same time portraits and landscapes, giving to the layers of architecture, the elements and gestures of humans. The people become the cities and the cities become portraits of the figures. And as mythology used to pass over the universal knowledge of the spirit of the days, the personal mythification of the artist’s life and of the people in it gives us a blink on some of the spirit of our time, rich with hopes, desires, emotions, memories and dreams.

Although the specific subject matter and process has been changing over the years, from myths, to damsels, to ghosts, to children, to cities, there are a few recurring images that have remained in David’s work. The most recognisable of these images are the house, the ladder, the boat and the bird. Their significance and meaning is not locked into one specific thing and are able to adapt to the work they are represented in. But they each do have an instantaneous and underlying personal meaning for the artist: the ladder is a method of entry and escape. It has become a message of elevation and reaching a higher level of understanding. Also, it has taken on the meaning of collaborative effort. The house is the mask of memory, the roots of memory. It is the elusive image conjured from recollection and dreams. It is also the thing he is searching for. The boat represents quite figuratively the journey. The bird is the fantastic, the unrelenting power and mystery of the language of nature.

The very famous painting “The Tower Of Babel” of Pieter Bruegel the elder, impressed so much David Hochbaum in his young age to consciously influence the aesthetic of his fantastic cities. Tributes and homages to the Dutch renaissance Master became recurrent in Hochbaum’s work, not only to underline the affection for the very first artist having an impact on him, but also to nourish Hochbaum’s personal private mythology exactly by linking it to such classical masterpiece, representing in turn a world renown myth.
From what we could define David’s mid career, he realizes how deeply-rooted is the subconscient bond he had all his life with the work of German contemporary painter Anselm Kiefer. The way Kiefer uses textures, rough brush strokes and layers, how he integrates litographs and drawings in his painting, how he uses “poor” materials, how he gets inspired by nature and landscapes, was unconsciously influencing the American painter for years. As photographer Hochbaum prefer black and white film photography, even if color is not banned from his work, sometimes recurring to retro-paint his photographs, more rarely using normal color film. The association to Jan Saudek’s work while confronted to Hochbaum’s retro-colored photographs, is almost immediate; not only because of the technique, but also for the use of costumes, often quite barock, and of handmade scenographies and special objects, and the peculiar use of the body. Hochbaum’s models are often embracing poses out of ordinary, quite acrobatic, maintaining a pointed sensuality but never falling into the manifested erotism of Saudek’s shot. That is not only because the work of other photographers played a strong inspirational role for David Hochbaum, such the British pioneer portrait-photographer Julia Margaret Cameron and the dark, grottesque, yet superb, work of the American photographer Joel-Peter Witkin; but mainly because despite the multiple references and inspirations, Hochbaum’s work developed a strong independent voice and unmistakable style. 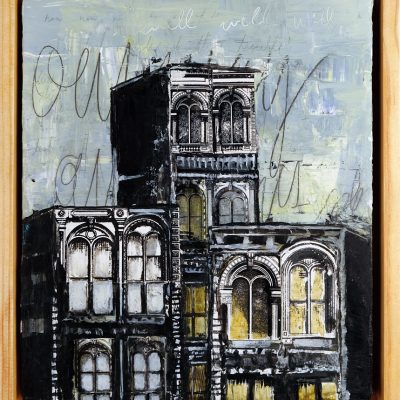 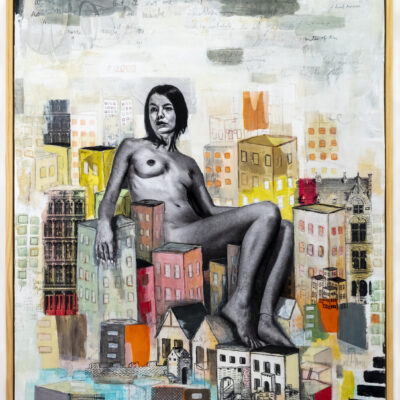 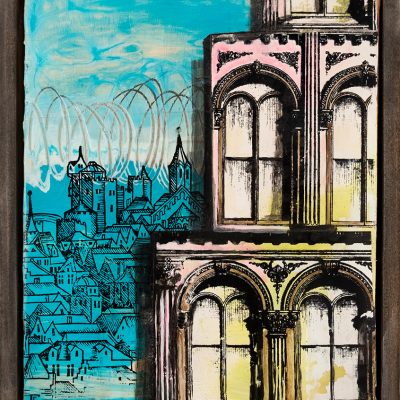 When the mighty empire at last closes its eyes at night and lays its heavy head down for a final eternal slumber amidst wracked death rattled sabers snored to its own deaf ears, this is what it dreams.
It sees realms so grand in ambition they are built to spill, the world’s burdens perpetually misplaced upon those of remarkable innocence and beauty, the ineffably eloquent elegance of a story that only flowers in its very last breath, and visions rife with omens of ill promise.
Instant recall in slow-mo replay, self-conjured collective memories, the incessant accumulation of after-image like some retinal feedback loop, what comes to light in David Hochbaum’s paintings is the manifestation of those things we can only imagine when darkness descends.
He renders indelible images as scant traces, suggestions of a fearful symmetry in which is etched the memento mori, the painful reminder of loss that can only be gained in the foregoing.
A lover with a coroner’s touch, a poete maudit in his heart whose only atonement is to illustrate the scriptures of civilization’s nefarious ends, a prevaricator and procrastinator extraordinaire gainfully employed by all who are bound to equivocate the inevitable,
there is indeed something magical about the way that Hochbaum can diffuse and disperse such simple truths into miasmic enigmas. To say that his art seduces us like no other is not merely to state the obvious, it is to admit our mutual culpability in some unspeakable
shared perversity. Like a Gothic Romance transcribed by the hands of Existentialists, David allows us to believe our doubts by doubting our belief, proffering a tarnished faith that shines in our darkest hours to guide anyone who truly wants to find the way to getting lost.
He fires the synapses, kindles the heart and strokes the libido of everything good and rotten in our mind’s eye, and just when we’re too intoxicated by the musky aroma of his yet unspoken insinuations he shakes us back to some stuporous consciousness with a rejoinder that these are in fact just pictures. And haunting though they may be, you still know what’s on the other side of this soporific sublime is a quotidian ugliness beyond despair.
A master-weaver of composite realities, is it any wonder that getting anywhere with Hochbaum’s art ultimately involves some sort of escape- a flight of fancy upon some inky-black bird’s foreboding wing or one way passage on a ship of dubious destination- where each semblance of understanding is posed as a dichotomy poised between irreconcilable differences? He’s an insomniac harvesting the fallen defenses and drifting thoughts in the forest of nod, a choreographer of gestures stumbled through like Freudian slips, a man who keeps all the media burning at all hours so that it constantly whispers bittersweet nothings like a moonlit babbling stream of consciousness in the emotional crevices of our psyche. If you ever spent time in that bedlam bar boiling just under the floorboards where David Hochbaum lives and works, you’d understand why he’s so good at accessing these psychologically interstitial places, carving lean-to castles in those compromised spaces where things are not how they re-appear to be. His art grows from the reproduction of images, from the diminishment of certainty and loss of authority that
is born in the reprocessing of visual data. A cartographer of interpositions, the place he imagines, The Mysterious Action of Memory as he calls it, can only exist as an arcane multi-media where photography, silkscreen, linoleum cuts, pen and ink drawing, acrylic and oil painting, carbon transfer and visionary epistolary converge in a single polyglot. There is unforgettable wisdom here, unutterable save for the lower languages where exiles, fools and madmen talk tongues to one another in the tones of forgotten prophets. 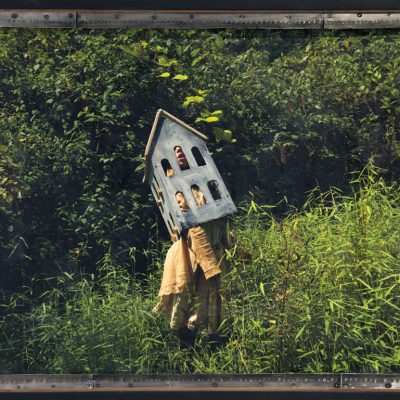 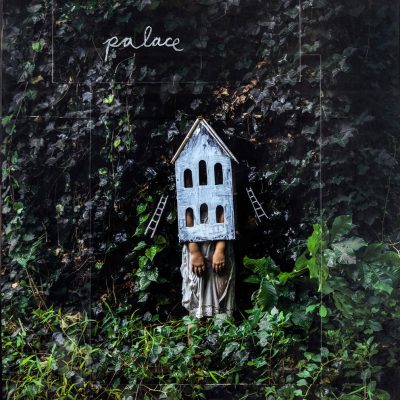