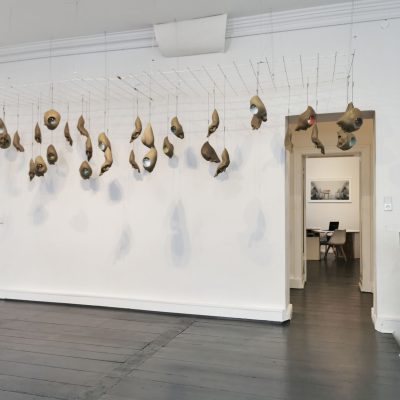 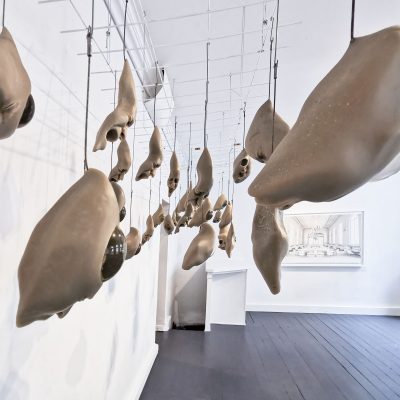 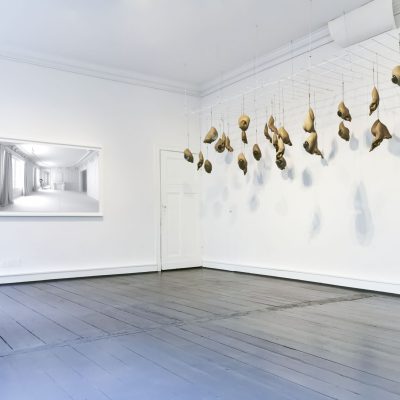 TRA COLOR CHE SON SOSPESI
(Between those who are in suspense)

The year of the 700th anniversary of the death of the great Italian poet Dante Alighieri, finds the world still immersed in the unusual pandemic situation that, besides causing actual damage, has led most people to feel an unsettling sense of suspension. For more than a year now, the series of lockdowns and restrictions on movement, the interruption of social and daily routines, have left us with a sense of fragility and precariousness. The difficulties that many have in being able to work properly, or to plan any project or plan correctly, reinforced our understanding of the state of Virgil and the other souls that Dante Alighieri suspended in Limbo, the place in the afterlife where the great pre-Christian minds were left to spend eternity in a state of permanent waiting. The description of this condition fits strangely with today’s perturbing collective state of mind, showing how feelings are such a fundamental part of human nature that, despite the considerable differences in time and historical context, we can always recognize and empathize with them.

At the same time, this state of suspension has awakened the global attention to fundamental existential questions, prompting humanity to question the “Übermensch” attitude we have developed for far too long, both socially and individually. We have become more aware of the consequences that this has brought, and still brings, to our civilization and environment, as well as to our psyche.

For many years both the work of Spanish artist Lidó Rico and Italian artist Aqua Aura have been investigating these issues, so we decided to present a selection of their works that not only reflect in a very perceptive way the ecological and moral issues of contemporary pandemic capitalist society but at the same time, are clearly linked to the inspirational feelings that Alighieri’s words have left behind.

The Italian meta-photographer Aqua Aura – presents his dystopian visions of a post-nature and post-human future, where the feeling of waiting suspended in the void seems to be all that remains; while the selection of works by the Spanish artist Lidó Rico refers partly to the fear of oblivion of individual and collective thoughts when measured with the flowing of time, and partly to the existential crisis caused by the confrontation of discrepancies in vision and feeling between the individual and society. 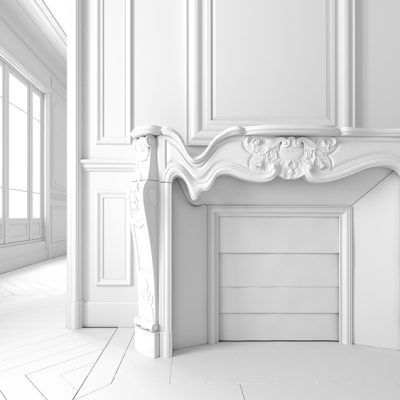 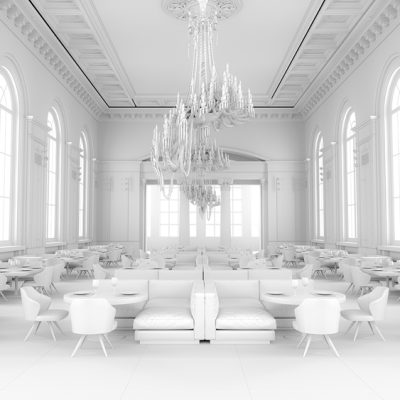 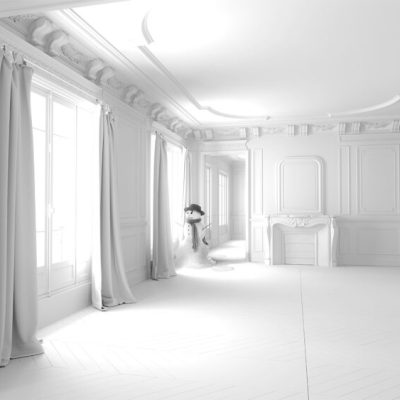 The large white spaces of Aqua Aura’s “Farewell Rooms” series welcome the viewers into a scenario where the feeling of suspension is tangent and becomes the subject of the work. Elegant and luminous, devoid of any form of concrete life, the meta-rooms refer to the private mental space of each person, where the intellect rearranges, clarifies, and classifies ideas, and where redundancy is diluted. Places of rarefaction where action has not yet taken place, or where everything has already happened, and nothing can happen again. The interiors, while describing Baroque settings, are transposed to contemporary aesthetics by the totalitarian use of the color white and dizzying perspective fugues. On the other hand, in a new shift to the past, their elegant, discreet forms and the stasis that dominates the scenes transport us to the bourgeois intimacy of those spaces of thought already described by the Danish painter Vilhelm Hammershøi at the turn of the 19th century, as if discreetly awakening the soul’s unconscious predisposition towards elevation.

Among those was I who are in suspense,
And a fair, saintly Lady called to me
In such wise, I besought her to command me. 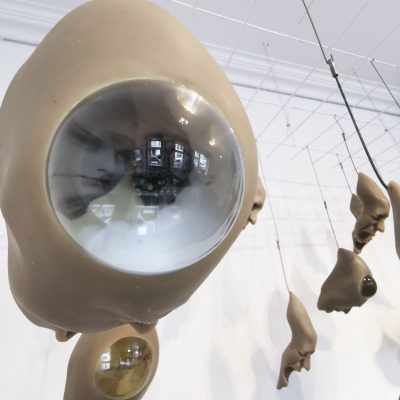 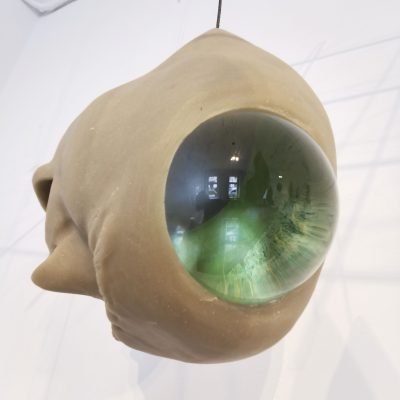 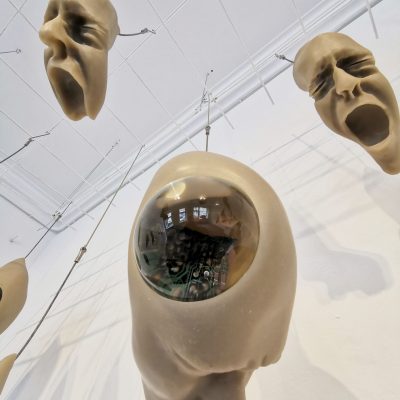 In contrast to the empty meta-stances of Aqua Aura, sculptor Lidó Rico’s works use the human body as a mean to communicate both emotional and sociopolitical stances.  According to Lidó Rico, a single individual can encompass and represent the whole of humanity, and in this sense, a person is considered to be a container for universal perceptions and ideas, as well as a set of independent and individualistic thoughts. His work often expresses the unpleasant feelings of the individual confronted with the inadequacy of any form of organized society, which, due to its own functioning, inevitably represses and flattens the varied range of human facets. As in Francisco Goya’s last works, Lidó Rico’s installations often feature a great density of bodies immortalized in suffering poses or rebellious gestures, underlining that the feeling of unease and inadequacy is common to the whole human race, regardless of the specific historical context.

“We see, like those who have imperfect sight,
The things,” he said, “that distant are from us;
So much still shines on us the Sovereign Ruler.

When they draw near, or are, is wholly vain
Our intellect, and if none brings it to us,
Not anything know we of your human state.

Hence thou canst understand, that wholly dead
Will be our knowledge from the moment when
The portal of the future shall be closed.” 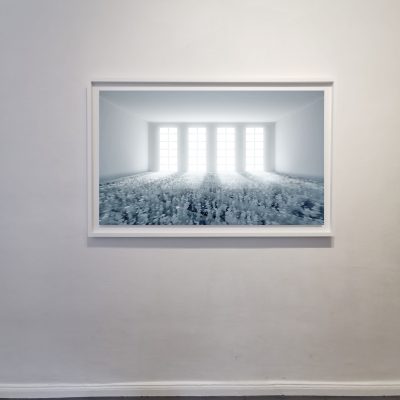 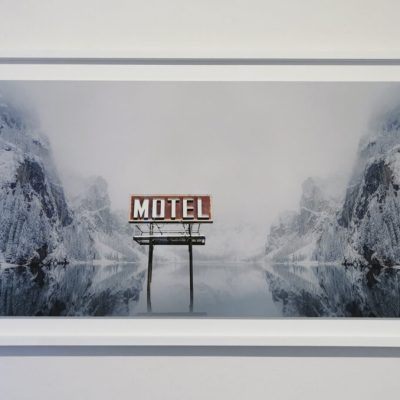 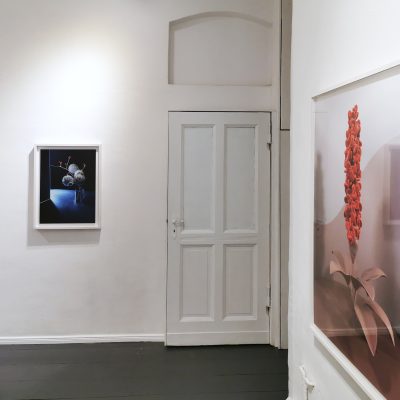 The other works by Aqua Aura included in the show are part of other series by the Italian meta-photographer: “Museum Highlights” and “Private Herbarium”. Like the previous works described above, these were also created during the forced isolation caused by the pandemic, an event that particularly affected Bergamo, the artist’s hometown. These are futuristic landscapes that incorporate and accommodate the last traces of the two kingdoms, the human and the natural: museum rooms that preserve the last frozen traces of wild nature, and macroscopic human cells transformed into synthetic flowers, make it immediately clear to the viewer that the artist’s reflections on nature and on ecological and existential issues – as well as his reflections on the beauty, fragility and even toxicity of humanity – are the real protagonists of these works. If we deny to the ecosystem its nature as an incubator of life, in its millinery cycles, it risks becoming an incubator of degeneration and death – just as if we deny to human anatomy its role as a generator of thoughts and feelings, as well as movement and action – we risk depriving the Future of any positive meaning.

“Whereat I turned me round, and saw before me
And underfoot a lake, that from the frost
The semblance had of glass, and not of water.” 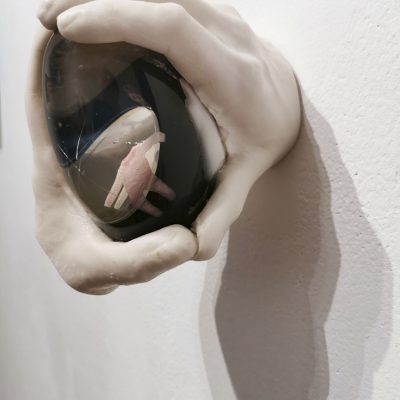 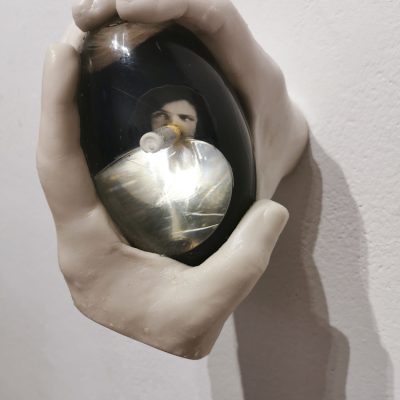 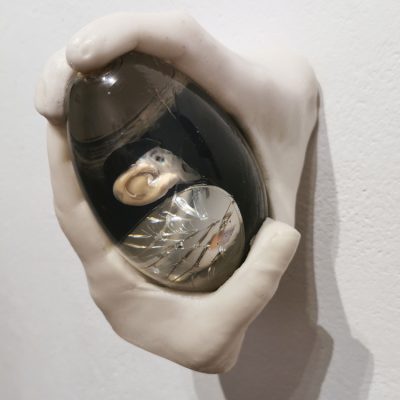 The concept of the metaphysical landscape is also common to Lidó Rico’s research, as we can appreciate in many of his works, such as in his series “The Oracle” or “Pensiamentos“.
In “The Oracle“, Lidó uses his hands as a sacred space that protects and at the same time presents disturbing scenes of metaphysical landscapes, encapsulated in ovoid crystals.
In his entire production of  “Pensiamentos” pieces, the metaphysical landscapes are embedded directly in the heads of his sculptures, as a physical manifestation of the innermost thoughts, pushing the viewer towards unorthodox reflections. Not unlike Dante Alighieri did in the Infernal Circles, Lidó Rico stages human miseries in the “Circles” of his meta-landscapes, for the benefit and learning of the whole humanity, not forgetting to include the observer through the skillful use of mirrors, while offering a light of hope through the brilliant use of a significant dose of irony, as a reminder to not take ourselves, or anything else, too seriously.

The metaphysical landscape is not only revealed as the main character in the work of these three artists, but as a necessity intrinsic to the curious nature of the human being, who yearns for discovery, growth and evolution, and who suffers so much from feeling “among those who are in suspence”. Today’s Ulysses does not resemble the Homeric or Joycean one, who eventually returns home, but rather the Dante’s Ulysses who loses himself in the limitless, revealing the ambition to overcome the limitation of knowledge, physics and ego, as the very purpose of the human journey. 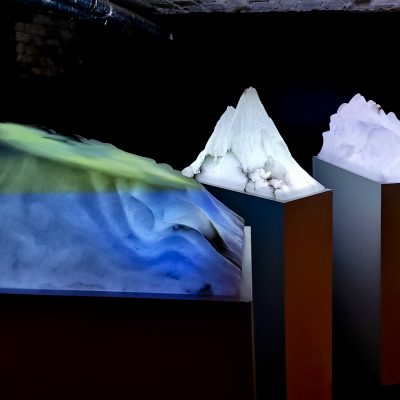 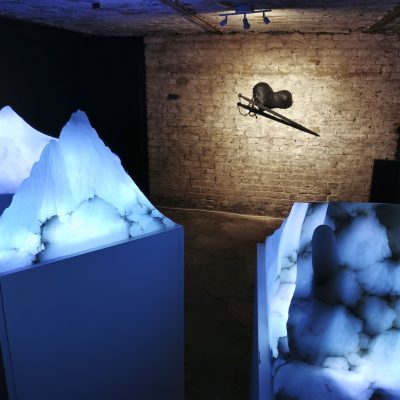 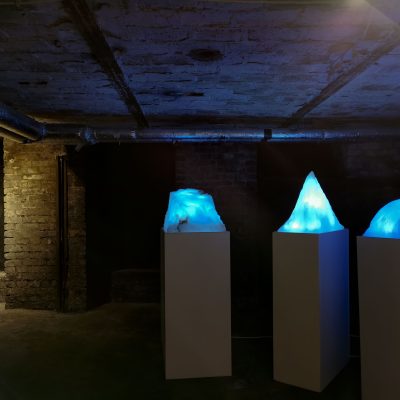 Downstairs in the Project Room we will find the dramatic video installation by Aqua Aura titled SHELTERS – On the very nature of light: sculptures shaped like icebergs containing videos of a time-collapsed 24h Nordic lights.
In this installation the weather’s mutability, from sunshine to stormy, from daytime to nighttime, and the choice of trapping it in the inside of alabaster sculptures, is a clear metaphor for an inner journey, exactly like the whole Divina Commedia.
Even if Dante did find himself wandering in the Forest Dark, and Aqua Aura wanders in iced landscapes, and even if one was clearly manifesting and exalting his religious and political beliefs, while the other one is presenting in a subtle way and with no words what is sacred to him, the soul search toward elevation and the intent to inspire the public to reflections out of the ordinary, make us choose SHELTERS as the perfect piece to end our journey in honor of the most known Italian poet of all time.

“Midway upon the journey of our life
I found myself within a forest dark,
For the straightforward pathway had been lost.

Ah me! how hard a thing it is to say
What was this forest savage, rough, and stern,
Which in the very thought renews the fear.

So bitter is it, death is little more;
But of the good to treat, which there I found,
Speak will I of the other things I saw there.”