The Theatre Of Reality

with a short presentation by art essayist Hans Irrek,
introducing Kenneth Blom’s monograph deisgned by Kühle & Mozer, Cologne,
published by Jason McCoy, New York, coming out next November.
-The artist will be present-

The Theatre Of Reality

with a short presentation by art essayist Hans Irrek,
introducing Kenneth Blom’s monograph deisgned by Kühle & Mozer, Cologne,
published by Jason McCoy, New York, coming out next November.
-The artist will be present-

The internationally renowned Norwegian artist Kenneth Blom approaches his compositions with the attitude of a stage director: on engineered backgrounds, characters/actors go on scene to personify the theater of reality. The use of diagonal lines skillfully mixed with horizontal fugues and minimalistic geometric design – reminding of the tautness and charm typical of the buildings at the time of the birth of modern architecture – brings the focus of the viewer to the human drama happening in the painting, invariably.

Blom’s sense of theatricality possesses an evident psychological substratum: the characters of his painting and their state of mind reflected in their actions – either if they stay put, jump, run, or fall – are indisputable archetypes of the human psychological condition and existential obsessions.
The latent sensitivity of the compositions is furthermore underlined by the sapient alternation of abstract and figurative painting, where wild strokes alternate with controlled ones, contributing to building the mystery, the inquietude, and the narrative of each painting. 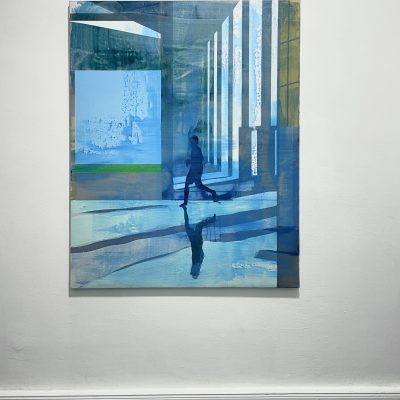 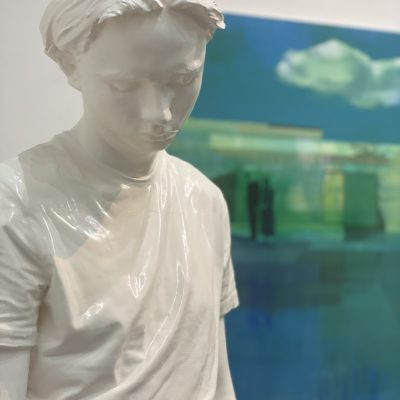 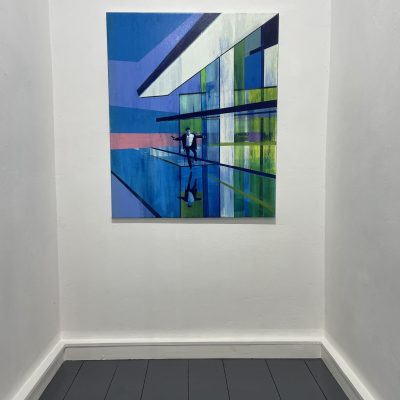 Additionally, the scenographic backgrounds with endless skies, bright portions of colors, mixed with geometrical elements give the sensation of the universe collapsing and twisting to that specific single moment, frozen in time, immortalized on canvas.

The pictured places are more like sensations of places, due to the simplification and abstraction of the shapes, becoming the perfect scenario for his archetypal actors to go on stage.

The mood is low, at times melancholic, the characters stand either alone or in pairs, and do not interact much with each other. The ethnicity of his figures is unrecognizable, while all ages and genders are depicted, emphasizing the psychological distress and the intrinsic sense of loneliness sprung by a dystopic perception of contemporary society, striking anybody at times.  This underlines the fact that Kenneth Blom doesn’t paint for a specific target, or to transmit a specific message, instead by bypassing them, he speaks directly to human nature. 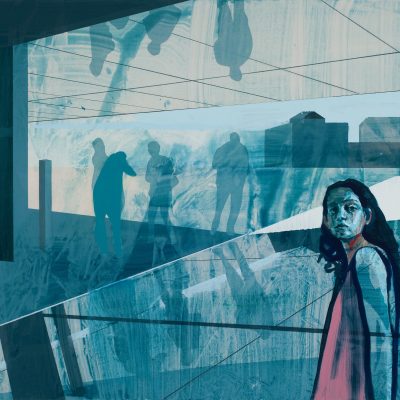 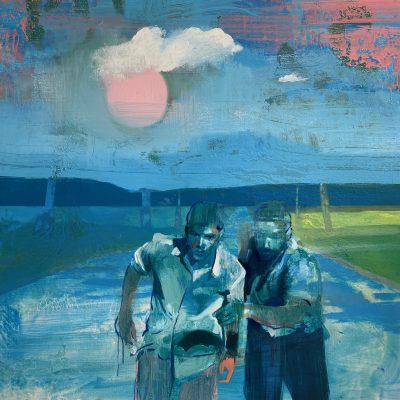 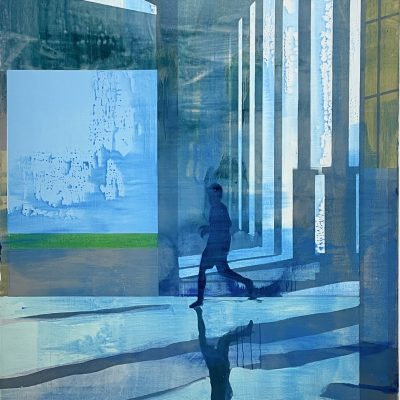 The radicalism of Blom’s pictorial language, revealed by the alternation of flat and sinuous forms, by the expressive deformation of the human body, by the specific choice of the color palette, and by the symbolic use of architecture, brings to mind the work of some of the most significant Masters of modern and contemporary painting such as Edvard Munch, Edward Hopper and of course David Hockney, routing him deeply into the contemporary art historical context.

The exhibition consists primarily of these large oil paintings, but scattered among them are a few white sculptures, 3D scans of figures from the paintings. The characters/actors are now physically present in the room, deprived of their scenarios, detached from the canvases, but even when deprived by the sustain of their scenography, they keep being strongly attached to their archetypical role and their own narrative.
These figures, pulled out of their usual surroundings, stripped of color and context, printed in plastic and placed on top of white plateaux, become sort of extensions of Blom’s pictorial universe, playing the role of silent pause between the dialogs of the colors and geometrical shapes, bringing the attention once again to the human theater, while allowing the paintings to keep being the protagonists the show. 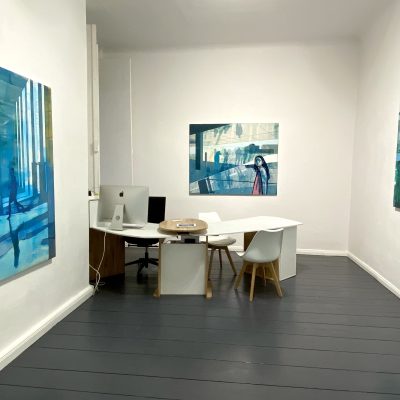 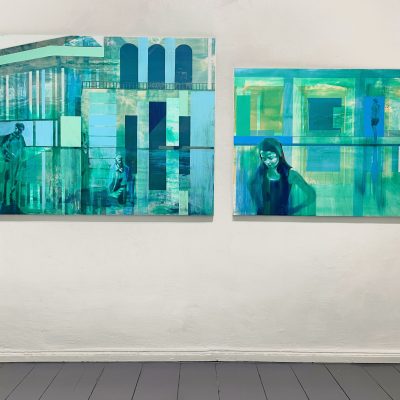 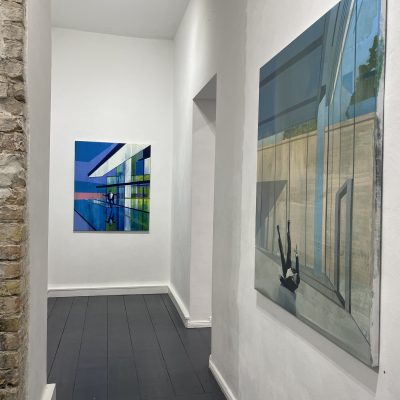 Kenneth Blom, with his talent to paint as a theater director, follows the statement by Antonin Artaud for which the true theater because it moves and makes use of living instruments, continues to stir up shadows where life has never ceased to grope its way. And so does Kenneth Blom’s art.