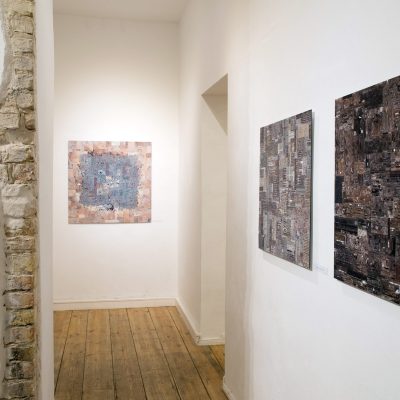 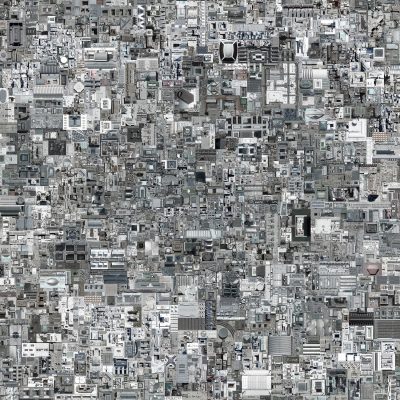 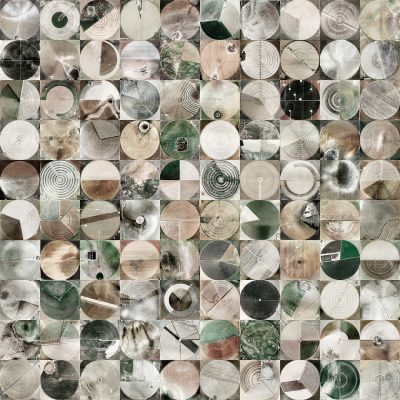 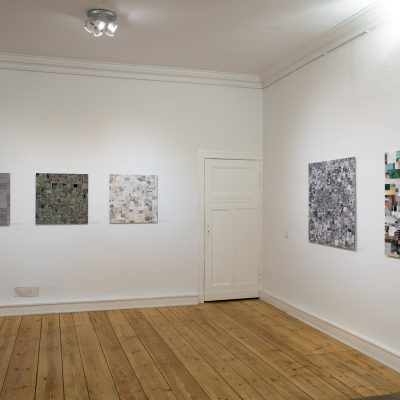 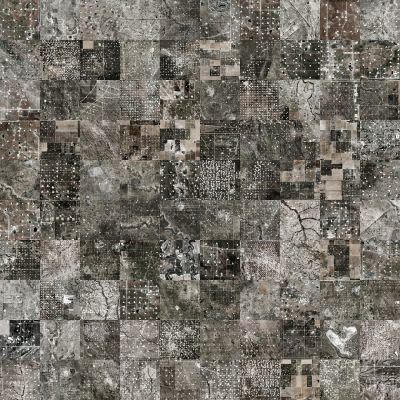 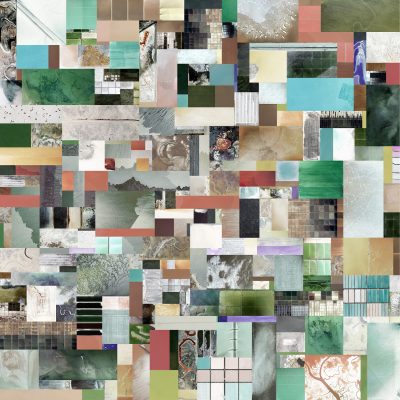 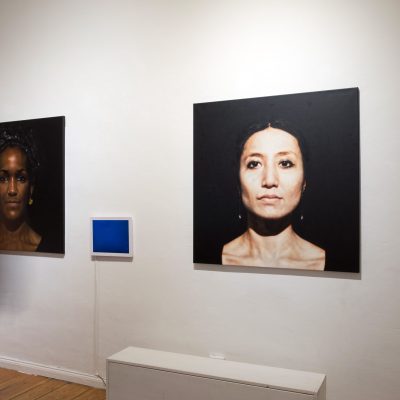 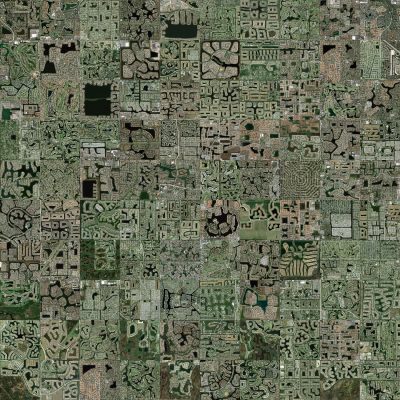 Paying homage to a great French writer, George Perec, this exhibition will focus on space as an element that forges the relationship between the individual and the other as well as that between the single and the self. Cherishing the difference between photography and painting, the works of Colin Dutton and Andreas Fischbach confront us with two different visions of space, involving the observer in a sort of perceptual journey able to affect their body as well as their gaze.

Interested in the global “machines” that sustain our contemporary lifestyle, Dutton realizes photographic panels by assembling multiple satellite images. In his serie “ Co-ordinates”, each panel is made up of between 100 and 3.000 individual pieces representing world cities, freight containers, Ikea stores, power stations, steel works and refugee camps.

By adopting a panoptic vision which elevates the viewer’s gaze to that of “a solar eye looking downwardly like a god”, Dutton creates kind of suspended landscapes that tell us stories about a mankind which remains entirely absent, hidden in those small spaces within the panels. It is a sort of visual fiction that these images create, a perceptual illusion where differences and singularities tend to be excluded, allowing the observer to indulge in the pleasure of “seeing the whole”.

Inspired by the aesthetic of satellite images, which have only recently become part of our visual culture, the artist seems to look at the non-lieux of our modernity almost through the same detached and judgmental lens of an architect or a town planner. With a particular attention to the detail, Dutton creates mosaics of our time where the artificial viewpoint is compounded by the viewer’s experience and knowledge to form a hyper-abstract representation of our world.

Compared to Dutton’s photographic work, the installation realized by the Swiss/Berlin based artist, Andreas Fischbach brings the spectator’s gaze back to earth. The exhibition combines painted portraits of three different people coming from three different countries. Each picture is associated with a video projection showing a list of statistic data concerning the economic, political and demographic condition of the country where the portrayed person comes from. A big world map where the three countries are highlighted complements the installation.

By juxtaposing a world map together with three acrylic painted portraits and video projections, the artist’s installation, Meccanismo d’informazioni, wants to be a reflection on how the information we receive every day from the mass-media about other countries, tend to influence our own personal representation of reality. By using the expedient of the chance meeting between the spectator and the portrayed figure, the artist wants us to reflect on how this overload of scientific information not only affects our own perception of the other but also influences the way we relate to them.

At the end of a real Icarus’s journey which saw us confronting with two very different visions of the relationship between man and space, the viewer is left with only one question: which viewpoint is the most deceptive one?

Colin Dutton was born in London in 1966. After taking a BA (Hons) degree in documentary photography at Newport, Colin moved to Italy where he’s worked as a professional photographer since 2002.

Andreas Fischbach was born in Lugano, Switzerland in 1982. In 2003, he finished his studies at Molino Nuovo and, eventually, he moved to Bologna to pursue painting in the art department of Accademia di belle Arti where he graduated with a first class degree. Fischbach currently lives and works in Berlin. His work is focused mainly on the media of painting, video and the possibilities arising from their combination.