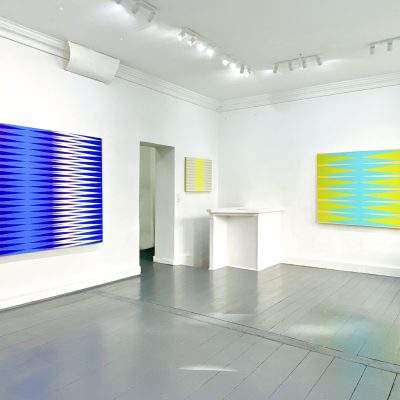 The carefully researched colour palette, the strict lines, the clear contours, the balanced, elegant precision, the optical effect and the strong energy emanating from Pablo Griss’s paintings are the key elements magnetically attracting the viewer to them.
His work is direct, without concessions to useless anecdotes, and straightforwardly hits the point where human consciousness meets the subconscious. It projects the viewer into a kind of parallel universe where the complete acceptance of the interconnectedness of everything is evident, accepted and manifested.
One of his most prolific and well-known series of works, “Color Magnetic Continuum”, on which Pablo has been working in recent years, began under the title “Intervention”, like the title of this exhibition.

Pablo Griss fishes in the fertile art historical junctions of Minimalism, Kinetics, Neo-Geo and Geometry, creating his own visual language resulting from a series of “interventions” he wanted to give to his predecessors, to free himself from the classical shapes and visual tricks typical of those movements.
The use of the classical squares, triangles, and circles is substituted by rhomboidal shapes and lines, looking like sharp knives or scalpels, as if the artist would display right on top of his compositions the weapons he uses to intervene, cut, and deconstruct the classical codes of geometric art.
The colors are mainly used flat and compact, always meticulously studied, continuing the researches on Color of his predecessors – such as Carlos Cruz-Diez, or Joseph Alberts and the Bauhaus school.
The tones can be loud, bright, various, following the tradition of his Venezuelan predecessors; or discreet, sober, mono or bi-chromatic, as a contemporary resumption of the aesthetic sense of minimalist compositions such as “The Mariage Of Reason And Squalor” by Frank Stella or Yves Klein’s Blu Monochromes.
The use of chiaroscuro or vanishing points, favorite tricks used to create the illusions in Opt-art, are abandoned to the advantage of concrete forms and colors alternation, evoking the sensation of multidimensionality, in which the artist proposes other planes, not understood as physical planes, but rather as a transition to other realities.
The brush strokes are steady and firm, as the physical manifestation of a strong and yet sensible will, able to translate onto canvas the common language of the whole universe: energy.

It is quite evident that Pablo Griss does not have as a goal to merely play with geometric constructions, but rather create concrete and iconic pieces that irradiate the universal energy and its possible power to transform. On the other hand, magnetic fields, radiation, resonance, currents, and electromagnetic waves, and their philosophical and psychological implications are surely phenomena that deeply influenced Pablo Griss’s existence, from his Engineering and Applied Science studies at Columbia University to the way he sees and interprets the life and human interactions selves. Precisely, in his paintings, these phenomena manifest not as diagrammatic illustrative, scientific reproduction, but as a minimalistic synthetic interpretation of their humanistic facets.

That explains the feeling of looking to something new, but jet familiar, when confronting Griss’s work, although it is the painting’s undeniable strength dragging the viewer along, beyond the own personal will, taste, knowledge, or education.

More info about the artist HERE