In Absence Of Binary Oppositions

In Absence Of Binary Oppositions 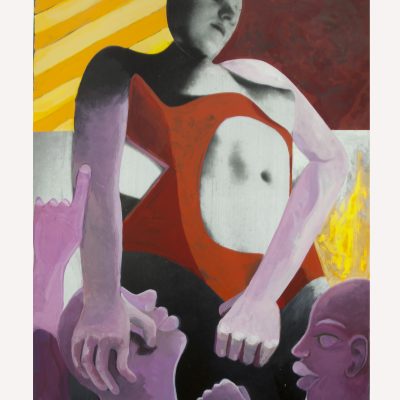 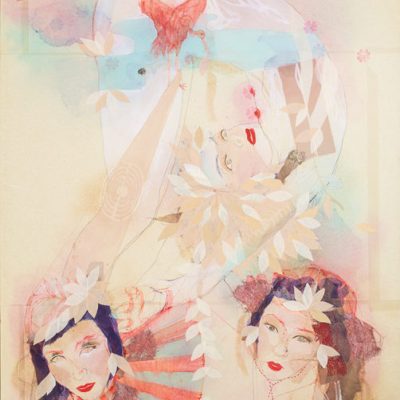 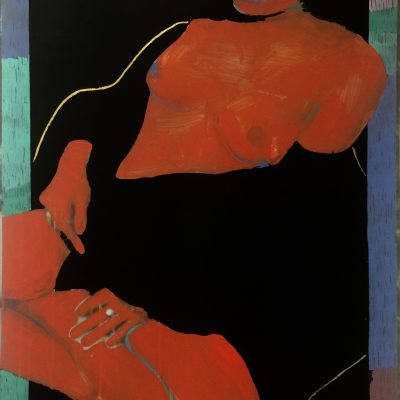 “Post Anarchism is an anarchism understood not as a certain set of social arrangements, or even as a particular revolutionary project, but rather as a sensibility, a certain ethos or way of living and seeing the world which is impelled by the realization of the freedom that one already has.”
Saul Newman

The work of the young Swiss-British artist William Grob, and the work of the Italian artist Elena Monzo are both distinguished by rough technique and a very peculiar aesthetic.
Even if coming from different cultural backgrounds and slightly different generations, both artists seems to look at the world with the same lenses, where the rules of binary opposition is willingly unaccepted. The binary opposition is the structuralist idea that acknowledges the human tendency to think in terms of opposition. With this categorization, terms and concepts tend to be associated as positive or negative. Derrida, the father of Deconstruction, argued that these oppositions were arbitrary and inherently unstable, the structures themselves begin to overlap and clash and ultimately they dismantle themselves from within. Both Grob and Monzo seems to embrace Derrida’s point of view, as the subjects depicted in their works not only absolutely eludes the strict structure of a conventional binary aesthetic, but even becomes heralds of a completely different one, so dear to the of third wave feminism, and to the post-anarchism, which argues that the perceived binary dichotomy between man/woman, civilized/uncivilised, white/black, old/young, beauty/ugliness have perpetuated and legitimized societal power structures favoring a specific majority. It is not a surprise at this point, that both William Grob and Elena Monzo are very critical towards mass culture. William explores the consumed/consuming society and its consequences on the individual, and Elena underlines its ephemerality, especially in relation to the feminine figure. One tears apart the reality he sees around him, leaving the wounds wide open, while the other decorates the wound’s edges with the finest embroideries.

Elena Monzo is able to combine the aesthetic of the subcultures pop and punk-rock with the sinuous elegance of the Art Nouveau style to create her army of most unexpected power ladies. Her tools are pencils, acrylic colors, graphite, make-up, stickers, textures strips, glitter and never forget a touch of gold. Sometimes fabric or raku ceramic. Her aggressive and still fine lines remind of the nervous and passionate ones by Egon Schiele, an artist who not only lusted after but genuinely adored women and that we can also see as a feminist who puts sexually liberated women at the centre of his art. In the body of work of Elena Monzo we find a similar feminism, where woman liberated by binary dichotomies express elegant erotic intelligence that conveys to some a sense of tortured subjectivity, but is truly emancipation of sexual and gender, rich of ironic critique towards mass culture standards of a society fixated upon evanescent but pitiless aesthetic rules. As Tracey Emin for the Brits, Elena Monzo is known as the “bad girl of Italian art” for her vision of women, which is quite opposite to societal norms in Italy, and previous notions of femininity. In a land where aesthetic models are mainly imposed by the fashion industry and by a misogynist politics that still pushes women to modify themselves and their bodies to please men in order to obtain security, money and protection, and where morality based on conventional catholic binary-oppositions is still dominant, the Monzo’s ladies, non-binary, wild, savage, independent, sexually empowered, non responding to conventional sense of fashion or etiquettes, can be surely unsettling.

As child William Grob had severe speech disorders and wasn’t able to express himself verbally until the age of seven. Instead he used color and forms to express his emotions and feelings and this is still deeply rooted in his practice, making the line between reality and the psychic world another main theme of his artistic practice. His series MASKS based on street photographs shot in New York City and Berlin, offers poignant mediations on life, society and individual experience, soaked with a polemic irony and compassion. A combination of factors that could bring us in mind the collage works of Angus Fairhurst, while his use of rough pencil strokes, and the drawing of the simplified, ungendered human figure brings him closer to the precursor of street art Keith Haring in his efforts to immortalize the living pulsing energy of our cities. The choice of stretching and taking to extreme the proportions of his asexual figures just enough, focusing on the outcasts, homeless, drunks, and the subtle loneliness perceived his work, reminds instead of the first works of George Grosz, with the slightly softened perspective of a young men that even if able to see the contradictions of our society and times, never lived the historical horrors of the first forty five years of the XX century. This exhibition presents as well a few of Grob’s bigger works from the series OVERLAID EMOTIONS. These are the result of painting interventions, driven by pure emotion, on reproductions of vintage photographs. Photography is dishonest as much as honest in the reproduction of reality, and by letting his emotions flow over them through color, either in a controlled way either in an impulsive one, Grob points his finger to the paradox that we live in a world which holds no truths and no answers, only beliefs. His belief is in showing at the same time a physical truth, the photographs, and an emotive honesty, the paintings. The use of apparently absurd and out of contest text in his work is also a way to represent the truth unfiltered by binary oppositions. As the permanent mumbling of our brain that can process simultaneously the most complex reasoning and the most banal thought, making us able to add to the dichotomy black/white not only grey, but also the whole range of colors and shades. 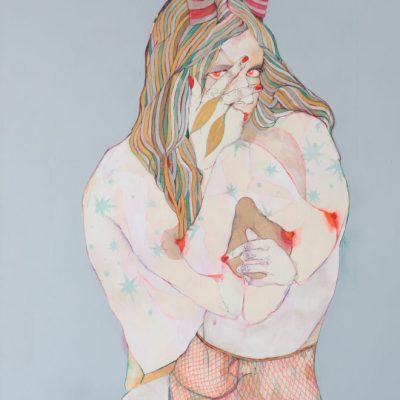 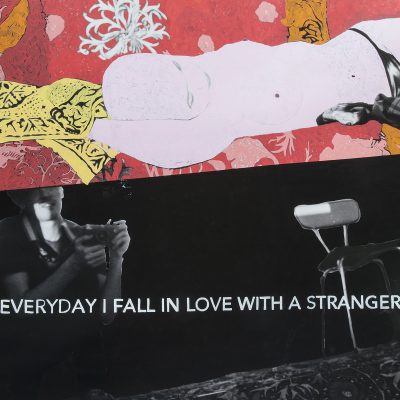