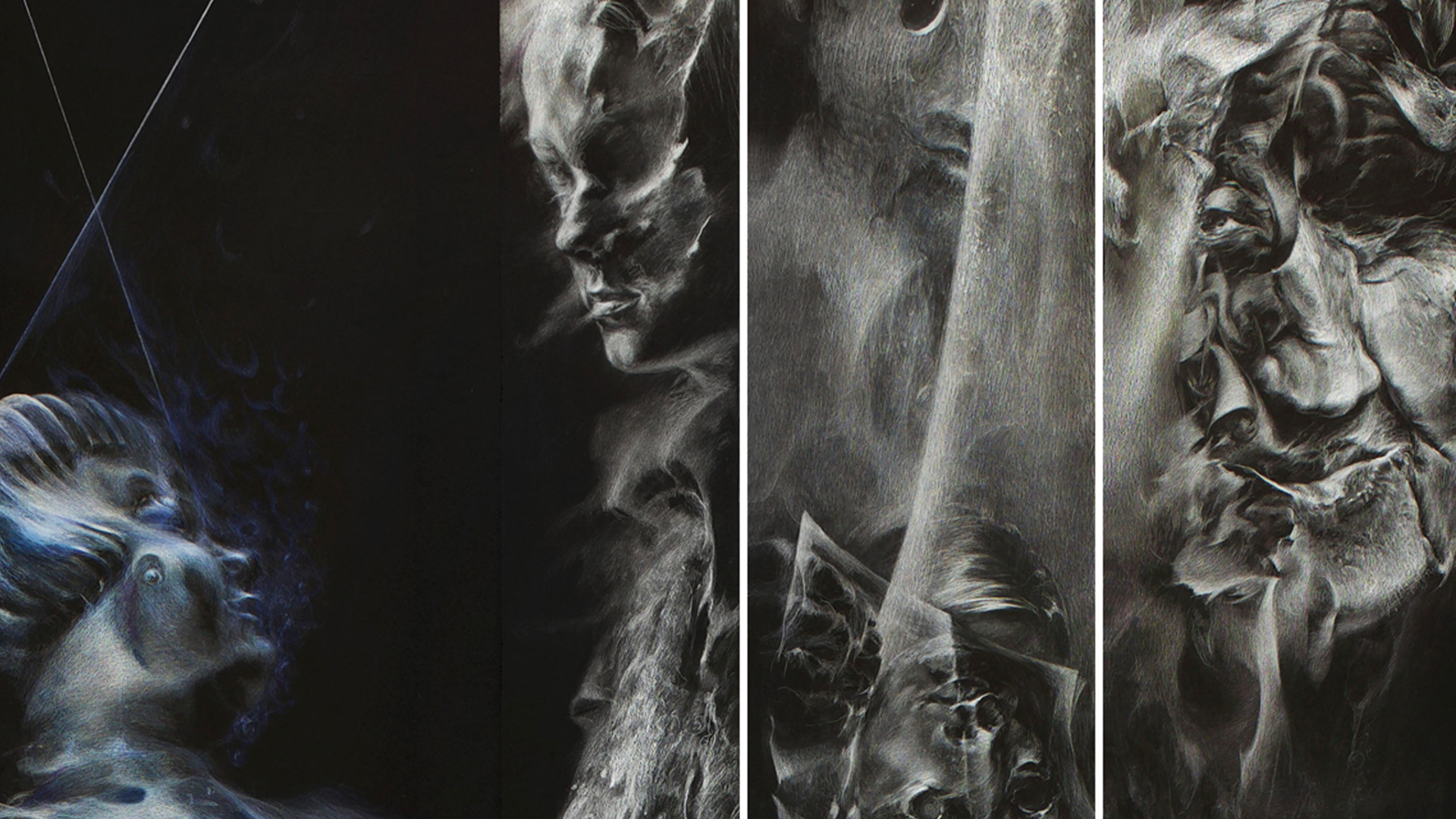 The virtuous drawing technique of the German artist Maike Freess, rich in an inexhaustible source of imagination, has an innate magnetic force, almost brutal. It is no longer the mere aesthetic pleasure to push the viewer to look at her. Maike Freess works indiscriminately with different media: photography, sculpture, video and installation. Her main production is nevertheless bond to drawing, technique through which she achieves a sort of hyperrealism.
Men, women and child are portrait in their most intimate condition, in spaces where anything is granted, as suspended in the oneiric moment between wakefulness and slumber. “Beauty”, “proportion” are just starting points. In her drawing process, the subjects start transforming, as something hidden and repressed would be revealed, something secretly desired, mixing up fiction and reality.   She doesn’t get to surrealism, because her work gives the feeling to be generated by a sort of a poetic vision. That’s because behind her figures hides a deep psychological work, as it’s not a specific subject to be represented, but more a memory of a dream, where conscious and subconscious, subjective and universal blend into one.
Maike Fress describes the main theme of her artistic research to be the individual in its imperfect nature, limited and unstable, the relationship with itself, with its surroundings, with other people and with society: the ambiguity of human psyche. 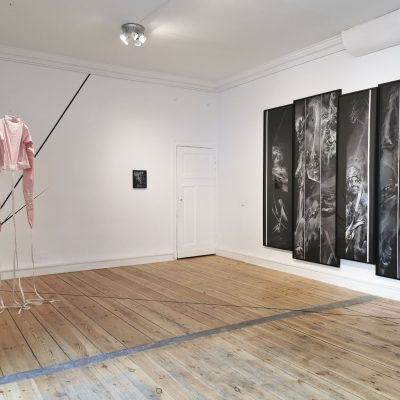 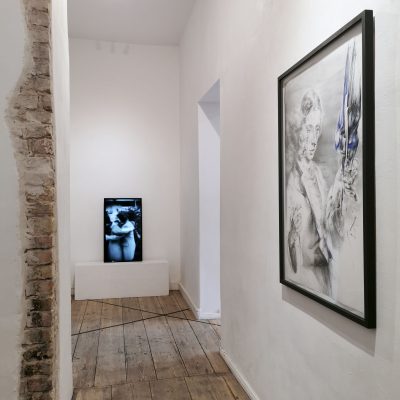 Arthur Schopenhauer wrote: “memory is capricious and bizarre, like a young maiden: now denying unexpectedly what conceded a hundred times, just to grant it back, when one stops thinking about it”.
In the series “Die Erben – The Heirs”, Maike alludes to genetical predispositions, to those undesired endowments transmitted to us by our ancestors, to face our journey through life. We must face our origins, our forefathers, at every change of circumstances, to understand who we are and where our possibilities lie. A contemplative work, bringing us back to a genetic code intimately connected to our inner self. Marcel Proust said: “we can find everything in our memory: it is a sort of pharmacy, a chemical laboratory, where we randomly put hands on a calming drug here or a dangerous venom there”. Through wisdom and experience we become able to obtain from our subconsciousness the proper instruments to face what’s lying in front of us. The existential experience becomes life thanks to memory. 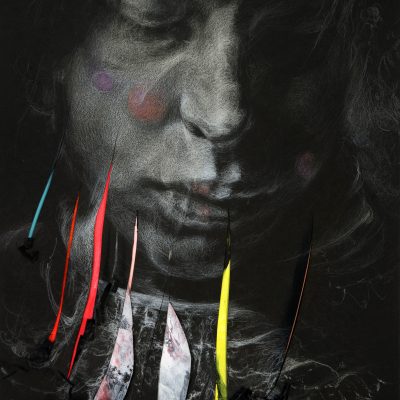 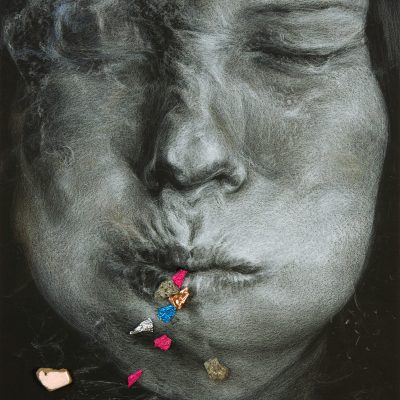 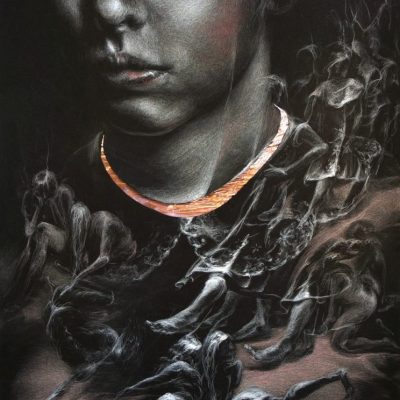 Maike Freess works in many artistic media: photography, video, sculpture, and installation. Her main field, however, is drawing. Her central motif – in all of her media – is consistently the human figure – concentrating mostly upon the classic, anonymous head or full-length portrait. Some of her works on paper are of overwhelming dimensions, reaching up to three metres, a feature more familiar in paintings on canvas. In addition to this size, there is the impressive hyperrealism of her drawing style, which also possesses an extremely corporeal presence.
Maike Freess has staged her exhibitions in such a way that all media interact, incorporating the space as well, and not only occupying the visitor visually, but drawing them into the work with their whole body. One is entirely unable to withdraw, becoming an agent oneself in correspondence with the protagonists in the spatial constructs of her pictures. In addition, her virtuoso handling of her drawing tools, together with the sheer, inexhaustible power of imagination, which finds and evokes new forms, motifs, and metaphors in every single sheet, has such a force that it is not aesthetic pleasure that makes one decide to look further into her works. Children, women, and men appear with expressive intensity, in spaces in which nothing is certain. They seem captured in dreamlike situations between waking and sleeping. They establish contact with their environment only hesitantly, feeling tentatively with their fingertips.

Maike Frees takes touchingly beautiful faces and well-proportioned figures as her starting point, yet in the process of drawing, in the touching of the paper by the artist so to speak, they start to transform. As if something repressed were being revealed there, a second nature that gets out of control: doll-like soldier figures march over a boy’s back, a woman’s stomach opens and all kinds of unappetising things emerge. The fantastic is mixed with the real. These are not surreal imaginings; rather, one receives the impression that these images are produced by a kind of [prophetic] x-ray vision. The skin of some beings comes loose as excrescences, spreading out in the image space. One sees limbs that grow apart from bodies, or foreign organs that adhere and attach themselves, distorted faces, people with artificial replacement joints. Spines and bones push through, some bodies are thin and seem literally not to be made of flesh and blood. Shadow creatures.

The texture of pencil on paper is partly to blame for this consistency. And then there are the double hands, and double arms that resemble afterimages (one is reminded of Muybridge’s locomotion studies!). The retarding interplay of limbs looks as if it were guided by higher powers. Hands and fingers play an especially important role in balancing the body, cautiously feeling ahead and exploring one’s own limits, and thus in the self-assurance of these beings within the visual frame. This also imparts a temporal succession to the picture, a sequence of movements, as if we were seeing a scene from a play. Like the people in her earlier photographic works from 1999-2004, the clothing of the protagonists is somehow oldfashioned, historical, and certainly strangely difficult to classify, a sign that the situations are anonymised and removed from our present time. 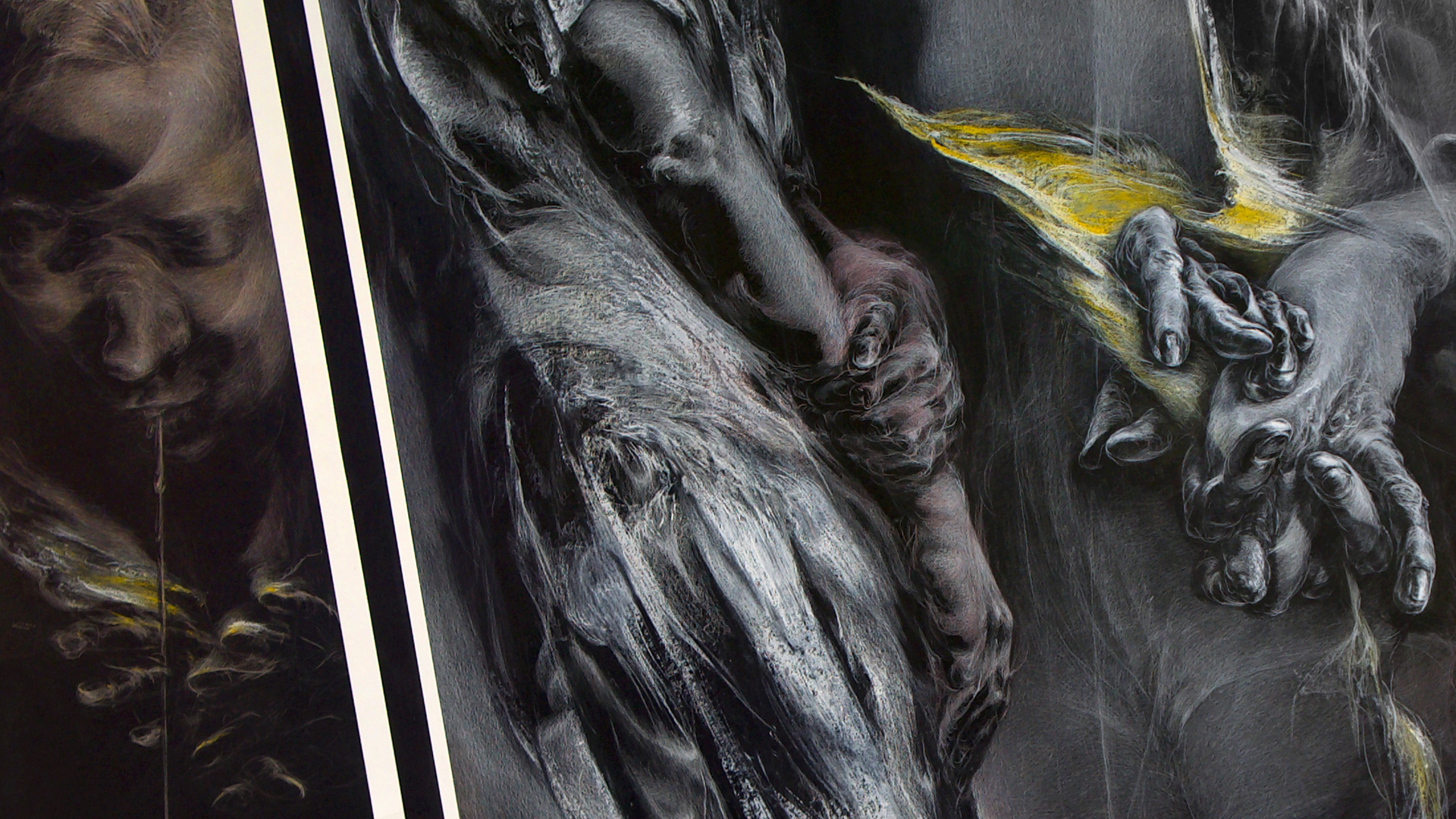 Maike Freess deals with what goes on in our heads; with images that we dream, that we remember. In a half-awake state, we are adrift from our own, real bodies, and involuntarily experience the past in a world of memory. This is not a world of true images, of truth, but instead of looking into the future in general, and in order to be able to live, our feeling and thinking must be determined by the positive. The negative must therefore be suppressed, wiped out, overcome. The images recalled in the imagination are accordingly subjective. The exhibition in the Samuelis Baumgarte Galerie bears the title: “Corrected Memory”. This assertion is more of a question, an existential as well as psychological one, which Maike Freess pursues artistically. Because the fundamental theme of her art is, as she herself formulates it, “the person in their imperfect, limited and instable nature, their relationship to themselves, to their environment, to other people and society; the ambiguity of the human psyche”.

1 A picture series that Maike Freess shows under this head is entitled “The Inheritors”, in allusion to the inheritance of predispositions, the unwanted endowment passed on to us by our ancestors for our journey through life. We have to see what we can make of this, which is to say to retrieve our existence into the positive, as emancipated beings furnished with free will. We have to address our origins, our ancestors, time after time in order to recognise who we ourselves are and where our possibilities lie. It is not possible, however, to look into the present while turned toward the past. This is the dilemma that divides.

Maike Freess visualises this divided view using the artistic method of the “paper cutouts” or “cuts”, as she calls the paper collages she has invented. At first, these were strips of cut paper in black or white that make the drawing grow out from the plane of the image into the room. Cut with Constructivist severity, yet more of an Expressionist artistic form in their jagged lines, they traverse and criss-cross our view of the picture. One might think of those Cubist and Futurist experiments that took things apart in order to view them from different perspectives simultaneously. But that would be an excessively formal interpretation. It is much more the case that the “cuts” visualise the outside world, produce blank spaces, breaks and emphases in the continuity of presentation. The cuts” are at once facticity and suggestion. They describe turbulences and – in their defined form in the indefinite spatial structure – make visible the uncertainty and instability of a world in which there is more than one reality”. 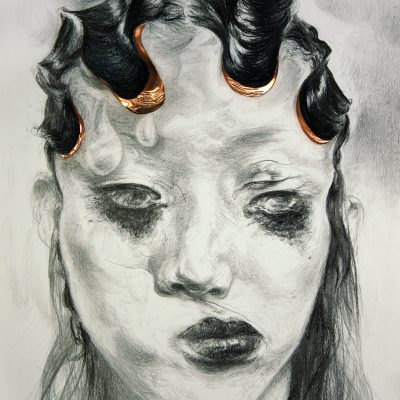 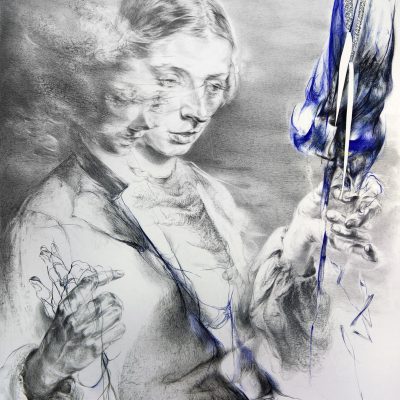 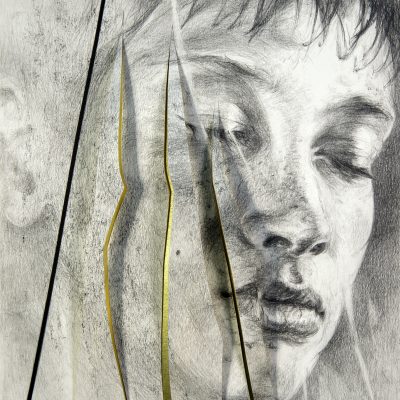 2 In her most recent works, she elaborates on the idea of the “cuts”. In the portrait, picture halves shifted or askew from each other resemble a shattered mirror showing not one but many egos, and signifying a splitting of the personality. The break lines also bring to mind a cracked photograph pane, cutting and injuring the picture it is meant to protect. One is reminded of the tragic figure of Narcissus, who wants to admire his beauty in its reflection upon the water, but the image melts away, he cannot hold on to it. One might also think of the lonely narcissist when viewing the full-length figures, which are imprisoned in a type of housing: “The very narcissistic person has erected an invisible wall around himself”, writes Erich Fromm, “he is everything, the world is nothing – or more accurately: he is the world.”

3 The next step from the “cut” leads to the collage. Fragments of reality or of dreams, souvenir pictures, are cut and new contexts, new unities are created through collage, entirely according to the will of the artist. For Maike Freess, it is a device that alludes to the possibilities of dealing with images. The souvenir pictures are arranged in new unity with the world – ad libitum and in the greatest subjectivity. In historical research this is called “Geschichtsklitterung”: historical misrepresentation using the “cut and paste” method. The film “Passage”, 2017, opens the exhibition and puts the visitors in the right mood for the profound emotional tension: ten couples welcome each other with an intimate embrace, separate again and leave the picture. The minimalist aesthetic with its concentration on the participants, the colouring following the colour circle, and the gentle sound in the background, indicate a relatedness to the “tableau vivant”, in which paintings are reconstructed by actors. The video is played backwards and at one-sixth speed. The welcome turns into separation, and it is possibly this which we recall as the most important aspect of an encounter. In memory, what has actually been experienced is “corrected”. At the centre of the exhibition “Corrected Memory” is a sculpture, as in her previous exhibition in Wuppertal “Of Blind Certainty”. In each of these cases, her work is closely related to drawing in its language of shapes and colour. Whereas in “Of Blind Certainty” it was a young girl with long blond hair, a grey pleated skirt, and an explosive belt around her waist, this time it is a little boy. A shroud of lead sinks heavily onto his shoulders, and despite this he looks forward innocently and alertly. With a white, ironed shirt and red bowtie fastened around his neck, he is other-directed, smartened up for the great task. The overly long arms struggle forth beneath the lead, extending beyond their own limits. He feels his way into the world. But the soft, pink-white skin is already permeated with grey in some places. One associates the work with Hölderlin’s “leaden time”, thinks perhaps also of Degas’s dreaming “Little Dancer”. Perhaps the burden also means happiness, the title of the sculpture “The Inheritance” leaves this open. The surest certainty is accompanied by the greatest doubts. 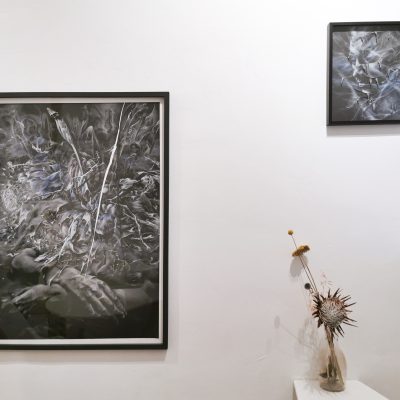 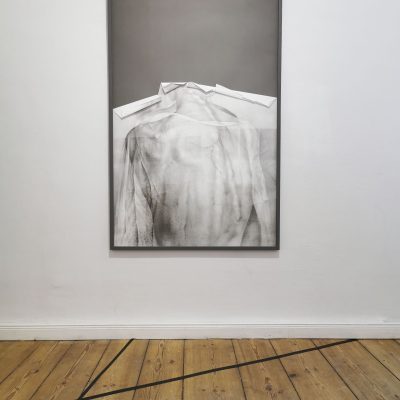 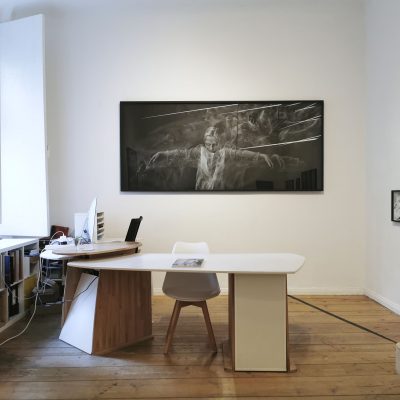