Michele Guidarini, born in Grosseto (Tuscany – Italy) in 1981, is considered a young Italian talent of international stature. Eclectic artist with great expressive strength, Guidarini draws inspiration from a territory rich in suggestions, between the Baroque mysticism and the typical imagery of punk music. He studied commercial art, then he got a degree at the School of Fine Arts of Florence.

Michele Guidarini, born in Grosseto (Tuscany – Italy) in 1981, is considered a young Italian talent of international stature. Eclectic artist with great expressive strength, Guidarini draws inspiration from a territory rich in suggestions, between the Baroque mysticism and the typical imagery of punk music. He studied commercial art, then he got a degree at the School of Fine Arts of Florence. 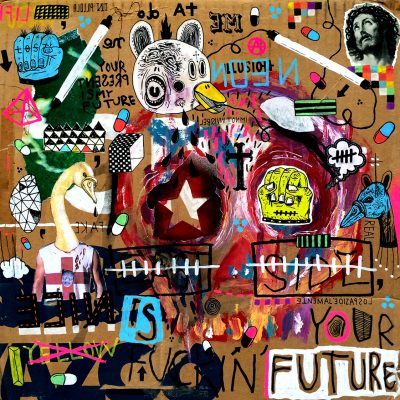 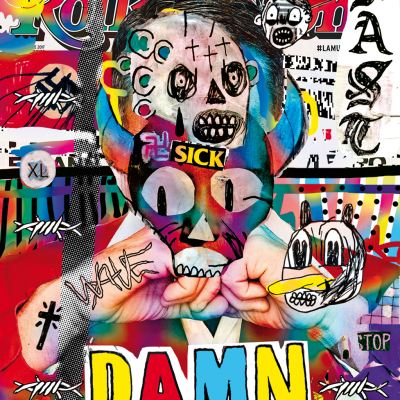 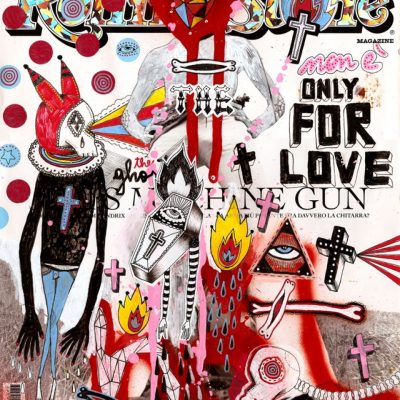 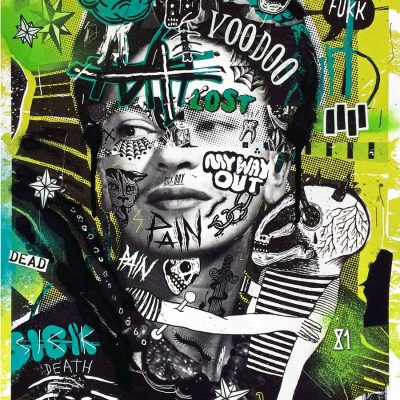 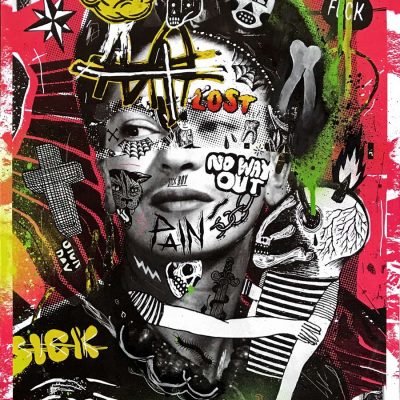 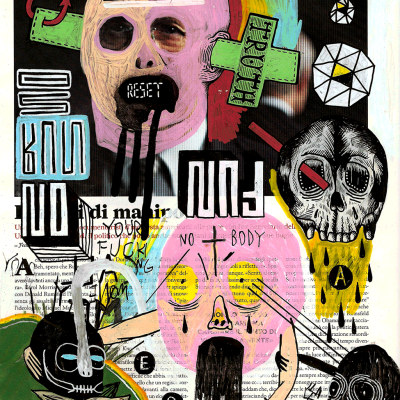 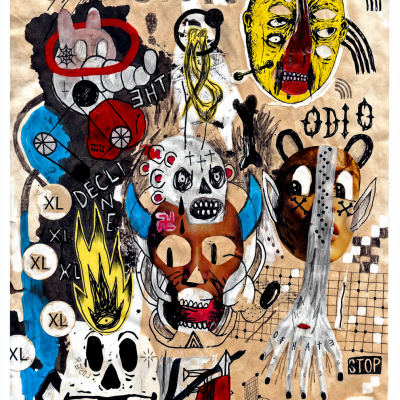 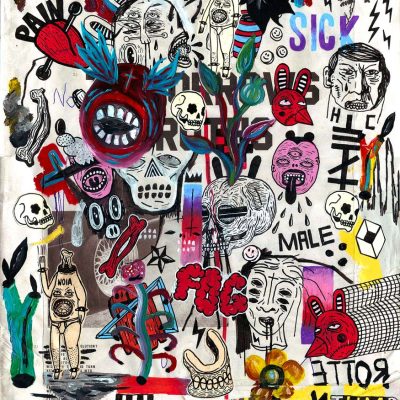 Michele Guidarini is considered a young Italian talent of international stature. Eclectic artist with great expressive strength, Guidarini draws inspiration from a territory rich in suggestions, between the Baroque mysticism and the typical imagery of punk music. He studied commercial art, then he got a degree at the School of Fine Arts of Florence. It was the study of painting that made him realize that the refined use of brush was not for him. The technique he uses nowadays is a a mix-media of pens, nibs, markers on paper and different recycled materials, sprays and collages, throughout tattoos on pork rind. Inspired ever since by artists like Bacon, Goya and Basquiat, Michele Guidarini started to get passionate in Low Brow Art, attracted by pop and dark esthetic for its visual impact. Rolling Stone, Tattoo Life and ArtGallery Milano present him as one of those emerging talents of greatest value in Italy. This young artist plays with forms and icons, reveals in his works a kind of irony which often clashes between love and death, sadness and euphoria, color and black and white, drama and comedy. He plays with religious and political symbols which marked our history and which influenced the present with the idea that “life is beautiful” in all the varieties of human points of view. Q: What is your background? How did you get get involved with graphic design and illustration?

MG: I was born as a graphic designer with a great passion for art and drawing. When I was 19, I attended The School of Fine Arts in Florence, a very important school for artists in the Italian scene. Here I got in contact with several artistic realities, classical drawing, painting, sculpture… but I was not completely satisfied. Later on, during the second year, I decided to attend a contemporary painting course held by one of the craziest professors of the school, who discovered my sketchbooks and advised me to forget what I had been doing so far and to dedicate myself to my personal style and sketchbooks. From that moment on, I devoted myself exclusively to my underground style. In a short time I was among those Italian artists which represent the lowbrow and pop-surrealistic art. My artistic career is now quickly rising and I’ve exhibited my works in lots of European capitals and worldwide.

Q: How do you think your style developed to what it is?

MG: From the very beginning of my artistic career, my style has always been my only form of expression, the only way to express myself. It arose in a very personal way, without the contribution of artistic disciplines, which, at that time, I did not know and did not follow. I started loving art at the time I bought a book about pop-art. Then I worked as a graphic designer and I used to hang around in book shops and I was attracted by book covers. Colors, layouts, fonts, chromatics. I started to develop a sort of pathological dependence for everything that was “image”, for all those artistic products which, because of their form of expression and their several techniques, could give different and surreal visions of reality.
Pop-art, as you can see, did not influence my style but made my passion for art grow, especially for contemporary art. And I started studying and writing about artists like Rainer, Bosch, Goya, Bacon, J&D Chapman, Paul McCarthy, Gilbert&George, Bacon, Lichtenstein, Duchamp, Franko B, Sherman and many more. Then I started getting interested in punk culture, from a musical point of view, as well as from a cultural point of view, and I started drawing in my schoolmates’ diaries. From the diaries I moved to sketchbooks, where I have been creating a world which regularly gives technical and stylistic surprises. In the end some moments of my world, impressed on paper, end up in galleries and are preserved in gold frames.

Q: Where do you get inspiration from?

MG: I draw inspiration from anything around me, better if it is stupid, repetitive, ordinary. Basically everything which is real and present. Through stupidity I rebuild a concept which is beyond my rough, informal and perspectiveless  drawing. As if it was the root of everything or simply the end of everything, or the total chaos of evolution. Moreover, my work is definitely and strongly influenced by life itself and by the music of those artists I adore: Johnny Cash, Tom Waits, Nick Cave, Kurt Cobain, Sid Vicious. And others I like exclusively because of their aesthetic fascination and their media and social image, like Adolf Hitler: his attraction toward evil and how he could plagiarize the masses.

Q: Why do you think our society is so logo orientated today?

MG: We cannot live without brands, since from the time we were young we have been barraged by logos, life styles, stereotypes, which automatically classify, make us judges and slaves. Nowadays we live in a society where masters exploit mainly media to do mass propaganda. We are contemporary slaves, programmed since the very beginning of our lives. A kind of evolution of dictatorship even worse than those which have been and which still are, in some cases. Today we daily fight for surviving even if we are rich or in good health, with the difference that survival is not water or food or something fundamental for our life, but it is an intellectual and categorical survival.  It is a challenge where we fight one against the other, a game where you just win or lose. There is no concern for the neighbor but just you, as a person in the present. We are living thinking that if we are oppressed by those who stay above us we end up given up for dead. So, there is an esteem for everything which is the symbol of greatness, strength, media visibility. Here you face brands, stereotypes, religions, which we think to belong to in order to make a solid community for our wellness.

Q: Have you ever worked on commissioned stuff? How was this experience? Or if you haven’t would you ever?

MG: The unique works on commission I have made are those for covers of EPs of indie bands. Obviously I always save the opportunity to work for something which could be akin with my attitude, where I could see a real connection with my art. I love working for music, since it is very important for my job.

Q: What are you planning to do next? Are you working on something specific?

MG: At the time I am collaborating with several galleries, Italian and foreign spaces, institutional and not institutional associations, which I regularly work with and exhibit for. In the last few months I have been preparing an exhibition which is not going to be composed exclusively by works which follow a thread but a container of works and installations which could sign my artistic and stylistic path. With this project I would like to give the idea of time and of the evolution of my style throughout its different temporal, emotional and mental phases; to give the idea of how from a point you can get to a form, how from black and white you can get to colors and for every step each work tells my own story, my daily story. “FUTURE IS SOLD OUT OUTSIDE” Solo show / 2015 PROGETTO METEORA / MILANO

“THIS IS SO CONTEMPORARY group show” – 2012 / AYDEN GALLERY / VANCOUVER