Christophe Delbeecke is a Belgian artist born in 1975. In 2015 he attended the Academy of Fine Arts at Ypres, specializing in ceramic and sculpture.

Christophe Delbeecke is a Belgian artist born in 1975. In 2015 he attended the Academy of Fine Arts at Ypres, specializing in ceramic and sculpture. 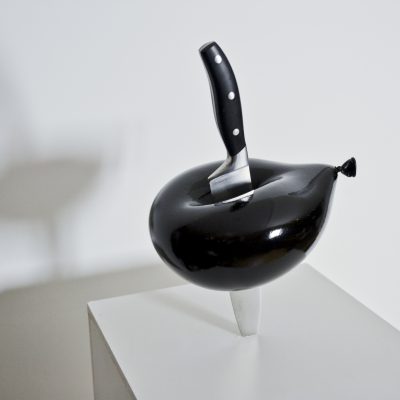 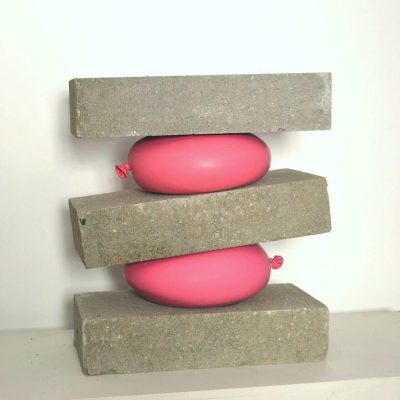 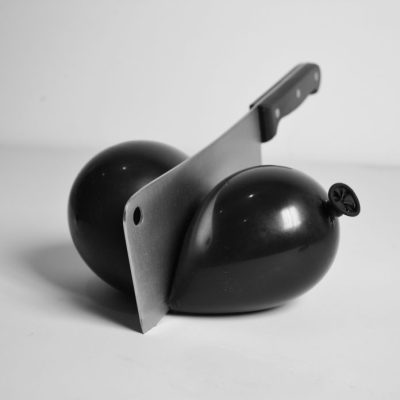 We could define the sculptures realized by the Belgian Artist Christophe Delbeecke as a physical representation of the concept of paradox: something apparently self-contradictory or logically unacceptable.
In fact, at first glance, the viewer is shocked by Delbeecke’s artworks because of the oxymoron created by the juxtaposition of two elements that cannot physically coexist: a balloon and a knife, a soft and delicate object in contact with a sharp element. The aim of the artist is to materialize tension and disturb the visual perception of the viewer bringing him into an uncomfortable and awkward status while admiring the artwork.

There’s also an interesting choice of materials made by the artist who decided to integrate into his most recent artworks objects form everyday life such as a knife or a kitchen hatchet. Anyway, the way the artist is able to create solid resin sculpture looking like a flexible balloon in extremely appalling. We can find also some kind of existentialist interpretation in Delbeeck’s sculptures which are always shaping a deep state of mind touching feelings like anxiety, hope and fair.

I/ We could define your sculptures like something kind of paradoxical, especially the “Balloon Series”. What is actually the message behind your artworks?

Indeed, I love paradoxical things, because they push us to meditate and think in a deeper way. With the “Balloon Series” I wanted to materialize the tension between the balloons and the sharp objects, which upsets the “pre-installed software” of our brains. In fact, we think that the image we are looking at it’s actually impossible, but still it exists. The point is that we don’t have the right perception of time, that’s why I titled one of my sculptures “Split Second”.
The message behind my artworks is very paradoxical as well, it can be positive and full of hope like, for instance, “Nothing can beat me”, but once you switch the objects it can get really negative and hopeless.

II/ The presence of daily life object in your artworks is almost a constant, let’s thinks about the artworks with the knife and other kitchen utensils. What are the reasons behind the choice of these materials?

I really love working with everyday objects because their banality offers a lot of different possibilities. We are so used to these kinds of objects that just a small modification can give them a totally new meaning, giving the chance to create something new and original. In my next artworks as well I am going to integrate daily life object, I have some projects in progress with flat screens and another one using more than 1000 bottles of mineral water. There’s also a huge diversity of material and I love to learn how to handle new material. Actually, that’s why I stopped working with ceramic at the Academy of Fine Arts, I was so tired of working over and over the same material.

III/ Is there ant artist who really inspired your work?

I’m a huge fan of Wilm Delvoye. Generally, I love artists with a direct style creating artworks that talk for themselves, with no need of a lot of “blabla” to make them interesting. Also, I prefer artworks where you can perceive the artist’s labour, I love when you can perceive the sweat, the tears drop and the white nights of failures the artist spent on it.
I like as well artwork with humour, like for instance the black humour of Joan Cornella and some artworks of Erwin Wurm. Those are definitely all the ingredients I would like to integrate into my artworks.

IV/Why did you decide to work with sculpture in particular and not other techniques?

I first began to approach sculpture 4 years ago. Actually, it was thanks to my two daughters, who pushed me to attend the Academy of Fine Arts. Before, more than 20 years ago, I was really fond of electronic music, especially of house music. I was mixing in live DJ sets and I was always surrounded by samplers, synths, drum machines…and later I also passed to vinyl. For myself, music is one of the strongest forms of expression, even stronger than the visual one